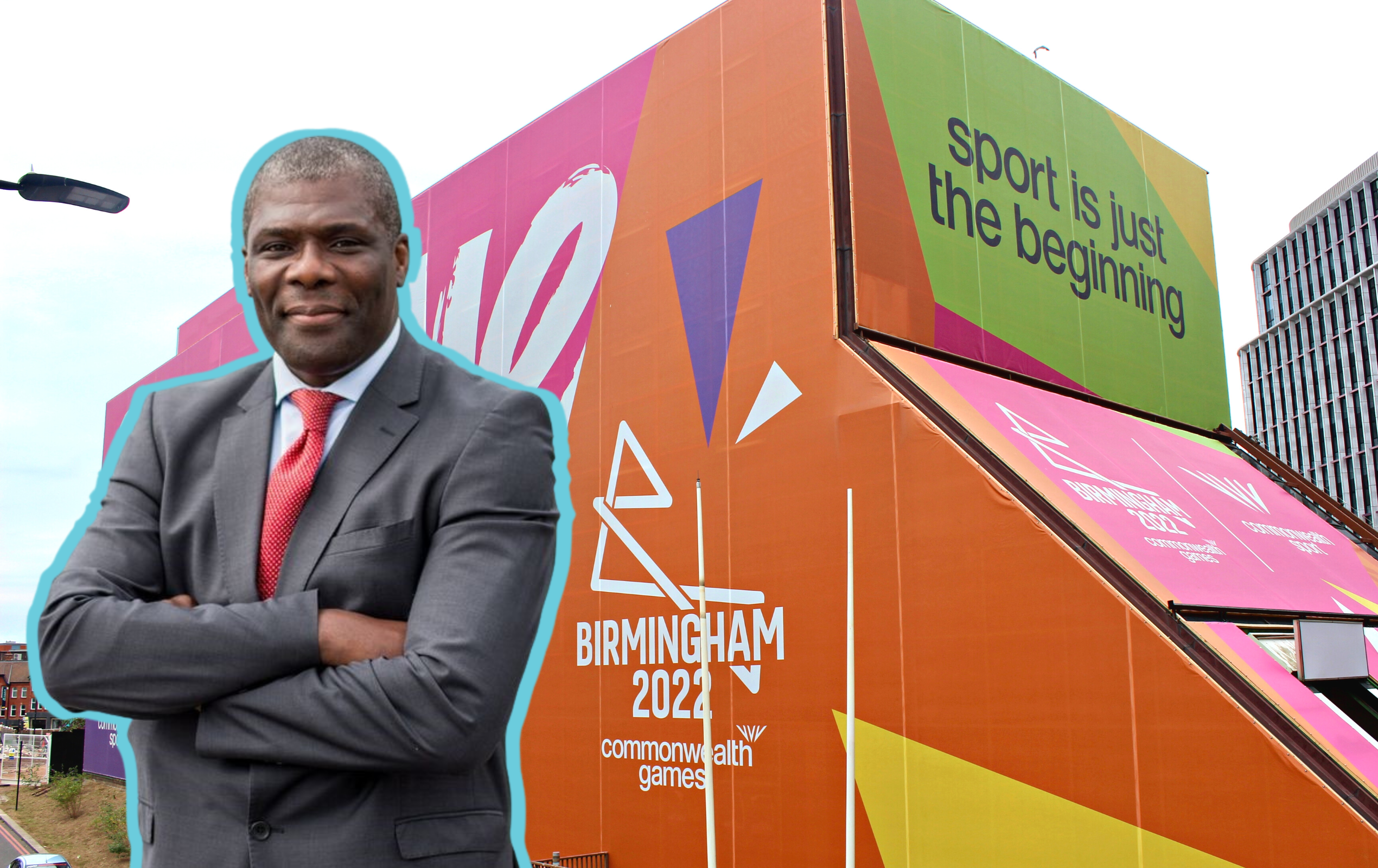 In June 2022, Geoff Thompson MBE DL, Deputy Chair of the Birmingham Commonwealth Games Organising Committee, launched It’s a Penalty’s Birmingham 2022 Campaign with a keynote address. Here he shares his reflections on the successful completion of the Games and the contribution to legacy that campaigns held in the wings can make.

As a former sports champion, and Deputy Chair of the Birmingham 2022 Commonwealth Games Organising Committee, I know the power that sport holds. For me, the recent Commonwealth Games – our first Games post the Covid-19 pandemic – were a wonderful festival of sports, arts and culture that lifted the human spirit after very challenging times.

The 2022 Games united Birmingham, the West Midlands and people throughout the UK and the wider Commonwealth in a celebration of sporting excellence and international friendship. The young sportsmen and -women who participated pursued their ambitions and dreams and proudly represented their communities and countries. The event was the best attended Commonwealth Games on record with over 1.5 million tickets sold to sports fans. Nearly half of the British public watched on TV, and hundreds of millions of people viewed coverage around the world.

Each Commonwealth Games reflects the host society and through its legacy provides an opportunity to input positively into that society. Certainly, as the Organising Committee, we wished to see improved mental, physical and emotional health and wellbeing, and wider opportunity as the legacy of these ‘Games for Everyone’, and as a fundamental human right.

As part of their legacy, each Games also provides a powerful opportunity to acknowledge societal issues, inequalities and injustices, and contribute to making change happen. The well-established sport for development and peace movement demonstrates that, through its social, cultural, economic and political impact, sport can address issues, challenge violence, and change the world. Certainly, as we live in an uncertain world during uncertain times, there are increasing issues to be addressed.

Modern slavery and the exploitation of young people is one of the most important issues to address locally and throughout the Commonwealth. The recently published 2021 Global Estimates highlight that 49.6 million people are in modern slavery on any given day. Human trafficking is a global problem – it’s the world’s fastest growing criminal enterprise and the world’s second most profitable after drug trafficking. The growth of poverty all over the world presents more opportunities for unscrupulous people to exploit young people for forced labour. Young women and girls in particular are being sexually exploited.

It may surprise you to learn, but the number of people in modern slavery in the UK is thought to be in excess of 100,000 and over 1,200 children are newly identified victims of modern slavery each year. Human trafficking and modern slavery are taking place all around us, often in plain sight. Recently, sports champion Sir Mo Farrah shone a light on the hidden issue of child trafficking for slavery/servitude by revealing that he was himself a child victim. We also know that recent statistics from the UK government and charitable organisations show that the UK is shifting from being a destination country for trafficking from overseas to an origin country. Domestic trafficking within the UK has been on the rise and will rise still further given the cost-of-living crisis and growing levels of poverty.

Criminal networks and gangs are finding it easier to target and exploit British young and vulnerable persons. The Children’s Commissioner has estimated that 27,000 children in England are at high risk of gang exploitation, grooming, manipulating and coercing them into ‘county lines’ activity. County lines is a form of modern slavery and internal human trafficking, involving the supply of illegal drugs from an urban hub into rural towns and county areas, moving across the boundaries of police and local authorities. Young people are often the ’runners’, transporting the drugs. This can take them miles away from their homes and they can go missing for extended periods. They are frequently exposed to physical and mental abuse as a means of control. There is also growing evidence that county lines gangs are sexually abusing children and young people and trafficking them to neighbouring towns for sexual exploitation. This largely, but not exclusively, affects girls and young women, but boys are also being sexually abused.

Another role I have is Chair of Youth Charter, a UK-based international charity. For the past thirty years it has been tackling educational non-attainment, health inequality, anti-social behaviour and the negative effects of crime, drugs, gang-related activity and racism through provision of sporting and artistic opportunities to disadvantaged youth. I firmly believe we can build up the immunity, resilience and emotional amour of our young people to resist the exploiters.

Youth Charter works to save lives and prevent lives being taken on our streets. Young men need to be helped to avoid gangs, county lines and knife crime and to be assured of their personal safety on the streets. I can confirm that nowadays, drugs are not the biggest ‘return on investment’ on the streets. Increasingly, it is the trafficking of girls and young women. And this leads to more gangs and criminality, violence and death.

These are real issues which are present in all communities, cities and countries around the world. Anyone who thinks that they are not impacted or touched by these issues is delusional.

And whilst sport is a force for good, we must recognise that exploitation also takes place within sport and is a pressing human rights issue. Major sporting events (MSEs) can increase the potential for human trafficking, labour and sexual exploitation – from the construction phase through to event delivery and associated travel and tourism. Furthermore, the manufacturing of sporting goods, apparel and merchandise linked to MSEs, with global supply chains, is another area where sport and modern slavery can intersect, often involving child labour.

For these reasons, the Birmingham 2022 Commonwealth Games, like many other organising and sporting governing bodies, developed and implemented a modern slavery (anti-slavery and human trafficking) policy. The aim was to mitigate and manage the risk of modern slavery and labour exploitation in all parts of our own organisation and in our supply chains and deliver an ethical trading programme.

We are also becoming increasingly aware that criminal networks are exploiting sport to engage in the trafficking of children and talented young athletes. Sham agents, claiming to have contacts with professional clubs abroad, promise fame and an escape from poverty, and transport young athletes from one country to another, often abandoning them without documentation or leaving them in debt to an ‘employer’ as a form of bonded labour. Child trafficking in sport and other risks needs a strong safeguarding response from sports organisations.

The Organising Committee for Birmingham 2022 was therefore fully supportive of It’s a Penalty’s Birmingham Campaign to highlight modern slavery. Such campaigns held during major sporting events can effect real and lasting change through education and awareness-raising among sports fans and the wider public. The participation of sportsmen and -women in these awareness-raising efforts is very powerful. It’s a Penalty’s sports ambassadors for Birmingham 2022 are effective advocates because they bring authenticity given the communities they come from, their lived experience of what sport has done for them and their knowledge of how sport can inspire young people to be resilient and realise their full potential. The campaigns also harness the power of partnership and collaboration with an impressive range of organisations and travel and tourism businesses partnering in the lead up to, during and most importantly post the Games.

It’s a Penalty’s campaigns are critical in that they acknowledge and draw attention to a subject that many would wish to simply deny, ignore or downplay. In recent years, the notion of human trafficking and modern slavery is something that’s being talked about increasingly in the news, but we always think that it is someone else’s responsibility. I believe that it is every single human being’s responsibility to take action against this crime of exploitation by at the very least becoming aware and knowing what to do if you suspect that a child or adult is a victim (#KnowTheSigns).

There can be no greater responsibility than ensuring that young people are protected, given hope and opportunity, and that, where exploitation takes place – whether it is labour exploitation in county lines, a car wash or factory, or sexual exploitation – perpetrators are prosecuted to the full extent of the law. Wherever exploitation is taking place, it must stop. If we act together across the Commonwealth, then it can stop.

As the late Madiba Mandela said, “action without vision is only passing time, vision without action is merely daydreaming, but vision with action can c