Skip to content
Birmingham 2022: The multiplex reasons behind running a campaign during a Major Sporting Event

Birmingham 2022: The multiplex reasons behind running a campaign during a Major Sporting Event 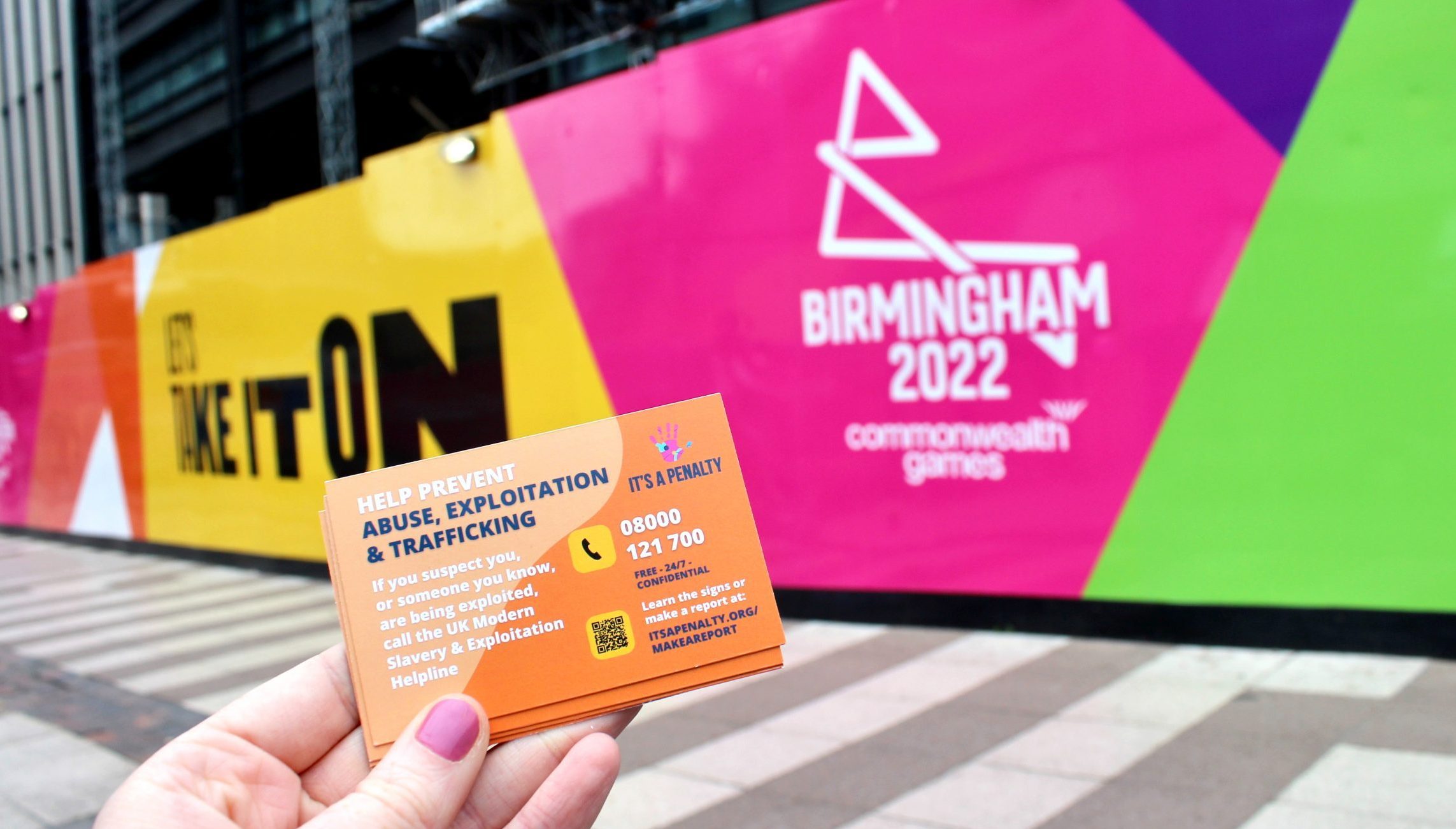 As the 2022 Commonwealth Games kicks off in Birmingham, at It’s a Penalty, we’ve also launched our latest human trafficking prevention campaign!

Our awareness-raising campaigns run in the lead-up-to and during major sporting events – both to contribute towards the positive legacy of these events in the hosting city and to use them as a platform for positive change and educate large numbers of people on the subject matter.

In recent years, the link between human trafficking and major sporting events has drawn global media attention and been a cause for significant debate. Human trafficking involves the movement of people for exploitation by the use of threat, force, fraud, or the abuse of vulnerability.

Because of the underground nature of the crime, solid data on human trafficking around major sporting events is limited. However, it has been suggested that the influx of a huge amount of sporting fans and tourists to a city can exacerbate existing cycles of human trafficking and exploitation. Indeed, anecdotal evidence from survivors of sexual exploitation supports that some traffickers see the increased tourism around these events as opportunities to make money. Furthermore, in the lead-up-to major sporting events, the large demand for building and construction, as well as hospitality services, can increase the risk of trafficking for forced labour. The potential increase in risk associated with major sporting events does not, however, mean that these crimes only take place in a city whilst it is hosting such an event.

On the other side of the debate, many organisations and some survivors refute claims that major sporting events increase incidences of exploitation. Media reports which highlight the ‘dark side’ of major sporting events have often drawn attention away from the ongoing problem of human trafficking and exploitation in a city in favour of sensationalisation, and have therefore been rightly criticised. Sensationalised media reporting misrepresents these events as the sole cause of human trafficking and thereby causes harm.

Recently, the issue of trafficking in and through sport has also been highlighted, including high-profile cases of the abuse of sportspeople by their coaches and doctors, and stories of aspiring athletes who are trafficked by people posing as sports agents or talent scouts. As well as preventing human trafficking from taking place around major sporting events, there is evidently a great need to safeguard athletes, both professional and aspiring, from being exploited.

The involvement of athletes in our campaigns is so important to us at It’s a Penalty. In addition to Ellie Simmonds, Usain Bolt and Cathy Freeman, the Birmingham Campaign is supported by Olympic athlete Asha Philip and netball star sisters, Sasha and Kadeen Corbin. These high-profile athletes have lent their voice to help raise awareness via a 30-second video shown in-flight by Emirates Airlines and British Airways, and digital posters to be displayed at Birmingham Airport, at Birmingham New Street station, and at Moto motorway services across the West Midlands. Through partnership with local NGOs and the travel and tourism industry, we are distributing digital toolkits containing campaign posters (translated into four languages), business cards and a list of local missing people at risk of exploitation to Hilton hotels, faith communities, and Airbnb hosts throughout the region. We are also working with local universities to educate young people as part of our Student Ambassadors Network programme and create slavery-free campuses across the West Midlands.

By working with athletes as the faces of our campaigns, we can reach so many more people with our campaign messages to educate, equip and encourage them. The mass appeal of major sporting events, as well as global media attention, presents an effective opportunity to educate large numbers of people on the subject matter, whether attending the event in-person or following coverage remotely. Furthermore, athletes all over the world can educate themselves, be aware of potential for abuse and the help that is available for them if they are being exploited.

The need for a human trafficking prevention campaign in Birmingham is clear. We know that human trafficking, exploitation and abuse is a major issue in the UK as a whole and across the West Midlands. In 2020, it was announced that there are an estimated 100,000 victims of modern slavery across the UK (Centre for Social Justice, 2020), and the economic and social cost of modern slavery is believed to be between £3.3 billion and £4.3 billion (Centre for Social Justice, 2020). In the West Midlands, there are reported to be up to 4,200 victims of modern slavery in the region, with approximately 70% of known cases involving children (West Midlands Police, 2020).

Our friends at Birmingham Children’s Trust know the reality on-the-ground. Imran Suddle, Missing People & Exploitation Manager at the Trust, spoke at our Birmingham Campaign launch and shared that, of the 30 children that go missing in Birmingham every day, “some of those children are missing for days, for weeks, months for years. We know from all the work we do that they are trafficked across the city. Some of our children have been found 300 miles away in the most unsafe spaces, frightened on their own, abused. Because of Birmingham ‘s geographical location, we’re the ideal place for organised crime groups to traffic children around the country and internationally as well.”

Making our work, and the work of our partners, to reduce human trafficking and exploitation even more urgent is the impact of the COVID-19 pandemic, which has amplified socio-economic inequalities and increased the pool of potential people who may be exploited in modern slavery. In the pandemic’s wake, we know that the vulnerable will be even more susceptible to human trafficking, exploitation and abuse.