Skip to content
Seven Lessons from Our Expert Panel on ‘What is Human Trafficking?’

Seven Lessons from Our Expert Panel on ‘What is Human Trafficking?’ 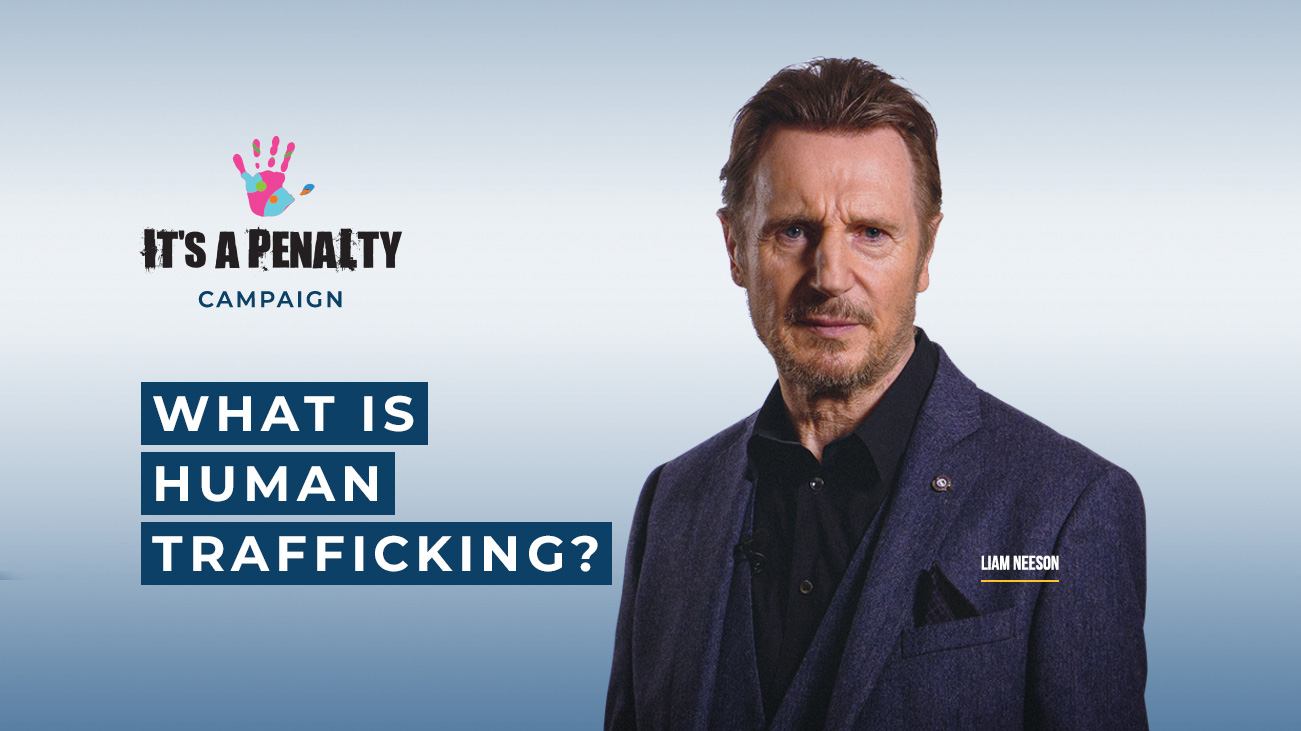 Our Live Expert Panel addressing ‘What is Human Trafficking?’ launched last week on July 29th. So far, it has been viewed by over 120,000 people around the world.

We are so grateful to each of our panelists for their important contributions to the discussion:

Our panel discussion focused on achieving clarity on the global reality of human trafficking and exploitation, as well as sharing actionable steps that can be taken to help end human trafficking. If you haven’t yet watched the panel, please CLICK HERE. The panel also served as the launch of It’s a Penalty’s collaboration with Liam Neeson in the form of a short video raising awareness about human trafficking and the steps to take if you or someone you know are being exploited. Please watch and share the video now to help spread awareness: CLICK HERE.

Throughout the panel discussion, seven important points were touched upon by our panelists, which have been summarized below.

We are honored to have had two survivors of human trafficking share their stories during the panel. The power of the stories of those who have been exploited and trafficked is not only in their strength and resilience, but also in the insights they can offer into how and why human trafficking takes place, and how we can end it.

As Callahan shared during the panel, “tragedy is what often brings about meaningful change,” referencing his family’s fight for justice following the kidnapping and murder of his brother Adam Walsh and his own struggle to achieve justice for his friend Lindsay Harris. The same can be true for the stories of survivors in that they can act as an impetus for change. Sarah acknowledged the power and impact of listening to the experiences of Sam and Kat, “hearing your story encourages me to keep going.”

Learning from the experience of survivors and those who have been exploited or trafficked is paramount in order to fully understand and be able to combat human trafficking; every survivor’s story is so different but can teach us so much.

We are so grateful to Sam for sharing her story with the panel and its viewers. It is truly inspiring what she has been able to overcome, and how she has since dedicated her life to empowering survivors through her organization Rahab’s Daughters’ mission of rescue, refuge and rehabilitation. During the panel, we also heard from Kat who recounted her incredible story of survival. Kat’s story is one of amazing resilience and we thank her for sharing it with us. As the founder of There is H.O.P.E. for Me, Kat has made it her mission to reach out to survivors and help them to heal: “if you are a survivor or you have experienced trafficking, I want you to know that it is not your fault and you deserve freedom too, there is hope for you.”

The universality of trafficking and exploitation was highlighted by several members of the panel. “Human trafficking today is affecting communities all around the globe, there isn’t one country that’s exempt from human trafficking,” Sarah noted. Callahan explained how it takes place in every state in the US and across every socioeconomic group, “it really knows no bounds.” “Everyone is at risk,” Kat explained whilst also highlighting the importance to not overlook marginalized populations and that “everyone needs help and everyone needs a voice.” The need for global action for this global issue was also emphasized. Sarah declared that “it is only when we come together that we’re going to make a difference.”

A key point made by the panel was that often people have misconceptions about human trafficking, what it looks like and how it works. Deborah shared her expertise and explained that human trafficking often looks very different from the stranger abductions we see portrayed in films and the media. “Human trafficking very rarely occurs with the abduction by someone the victim does not know,” she stated.

Unfortunately, those who are exploited are often preyed upon by people they know or trust. “The vast majority of people who are trafficked are trafficked within their own communities and often by people they know,” Sarah explained. Traffickers often entrap their victims after having built up a relationship with them, whether under the guise of friendship, romantic affection or familial care. “I just wanted to feel a sense of belonging, a sense of love, a sense of family coming from a broken home,” Kat shared how she was first trafficked by a man who formed a fatherly relationship with her.

It is important to know what human trafficking can look like in order to spot whether it is taking place. To find out more, please visit www.knowthesignsnow.org.

The importance of prevention was underlined by the panel. ”An ounce of prevention is worth more than a pound of cure,” Callahan declared. Sam also explained that “prevention is better than cure. If we can prevent, that’s way more important. With cure, it takes 4-6 years to really unpack this for someone, whereas, if we can prevent it, it’s a much easier cycle.” It is paramount to to not only stop human trafficking and exploitation from ever taking place, but also to respond with help for survivors, and to bring justice against perpetrators. “One missing child is one too many,” as Christian highlighted. We believe more needs to be done to tackle these issues to prevent it from happening in the first place, including raising awareness, educating on a global scale, and intervening when necessary. At It’s a Penalty, we have always championed the belief that prevention is even better than cure, and we are encouraged that our panelists agree.

The impact of COVID-19 and the global pandemic on rates of exploitation and trafficking, particularly among children, was highlighted as a major concern. Regarding child sexual exploitation and child sexual abuse materials, Callahan explained that “in the last couple of months, we’ve seen a 90% increase in reports to the NCMEC CyberTipline…In April alone, we had a 318% increase in reports.” Not only has increased time at home resulted in a growth of offenders accessing child sexual abuse materials, but it has evidently increased their attempts to lure children and exploit them online. “We have seen child predators talking in the dark web, discussing amongst each other best practices on how to harm children during this time, looking at COVID as…a great opportunity for them because of the increased screen time for both adults and children,” Callahan stated. He also drew attention to the ways in which COVID-19 has impacted trafficking, “in the beginning, we saw the traffickers move to somewhat of an online subscription-based content supply to their buyers because buyers and sellers were a bit reluctant to meet in person for commercial sex. Unfortunately, because bans are being lifted and whatnot, we’re seeing those numbers go back to the pre-COVID times of children being used for commercial sex and meeting face-to-face with buyers.”

The need for parents to be aware of the potential risks posed to their children both during the pandemic and after was stressed. “It’s important for parents to know who their children are spending time with,” Kat highlighted. With children so vulnerable to trafficking and exploitation – as Deborah explained during the panel that “the average age of a trafficking victim is between 14-17 years” – it is vital that parents are able to recognise the signs and intervene. For a list of resources for parents and children, please visit www.knowthesignsnow.org.

The panel concluded that the most important steps that everyone should take in order to help end human trafficking are to KNOW THE SIGNS and learn how to MAKE A REPORT.

Regarding knowing the signs, Christian emphasized that “every human being has this innate suspicion, they know when something isn’t right…We need people to use that innate suspicion to look out for people in their community.” Deborah highlighted the importance of knowing what signs to look out for to spot human trafficking and exploitation, particuarly amongst parents with their children. She explained “we must understand that these are symptoms and the warning signs that a child is being groomed and trafficked.” For a full list of signs to look out for, please: CLICK HERE.

Equally as important as knowing the signs is being able to make a report if you suspect exploitation or trafficking. As stated by Kat, “if you see something, you need to say something…You could be the one who makes a difference.” Sam shared how even the most seemingly insignificant information should be reported, “Sometimes it’s just the smallest tip that unravels things in a way that we can see a pattern…Information is power. The more information reported to hotlines, the more armed we are in the field to really understand that actionable information.” To find out how to report abuse, exploitation and trafficking in your country, see It’s a Penalty’s interactive world map of reporting hotlines: CLICK HERE.

THANK YOU TO ALL WHO MADE THE PANEL POSSIBLE AND ALL WHO HAVE WATCHED!

We want to thank all of our panelists and partners who made this panel possible. To find out more about our partners, please visit knowthesignsnow.org for full details on their important work. We would also like to express our gratitude to Liam Neeson for collaborating with us to create thiscampaign video and lending his voice to help end human trafficking and exploitation globally. Lastly, we want to thank everyone who joins us in the fight against human trafficking and exploitation and those who have watched the panel. Together we can make a difference!