“It was an absolute pleasure to work with It’s a Penalty. Hopefully, it can be a legacy arrangement for future Commonwealth Games.” – Pat Vidgen, General Manager I Strategic Engagement Team, GOLDOC

Publications: 3,024,999 passengers – Virgin Australia shared a full-page advert about the campaign in their in-flight magazine 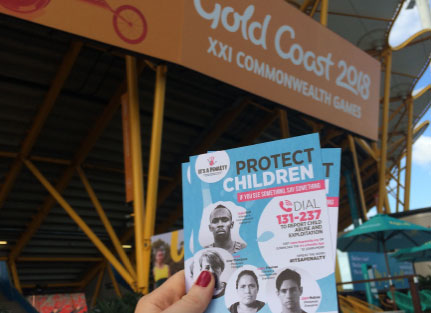 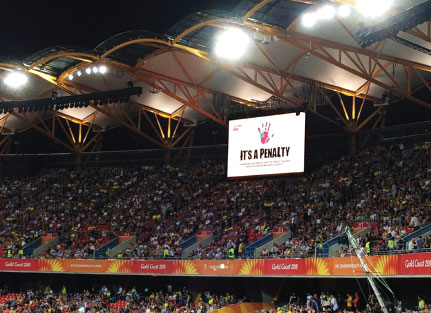 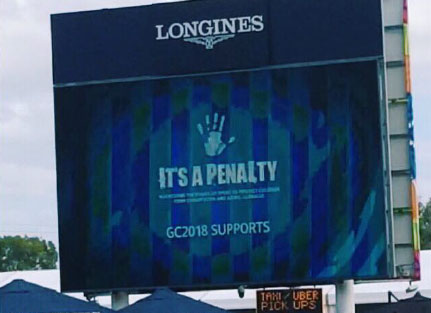 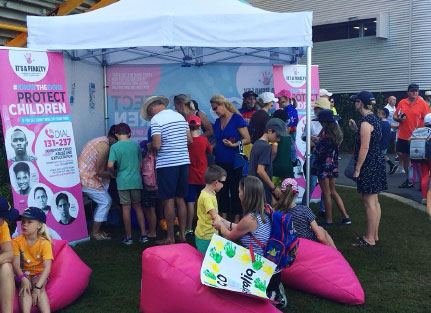 Partnering with the Australian Federal Police (the AFP), on all of our campaign materials and campaign film, we featured their 131-237 hotline to report. In the Gold Coast, It’s a Penalty’s campaign materials were distributed in 50 participating hotels and 30 bars/pubs – reaching an incredible number of tourists and local residents. During the Commonwealth Games, we also engaged with participating athletes, as 10,000 campaign wristbands and informative leaflets with #knowthesigns were distributed in GC2018 welcome packs.  Our campaign film was also shown in all Games venues and in 11 Village Cinemas across Australia throughout April. To deliver an outstanding campaign, we partnered with three locally-based NGOs: A21 Australia, Bravehearts and Red Frogs. Together with these organisations, and thanks to the support of the organizers of the Games, It’s a Penalty had a marquee inside Carrara Stadium, manned by a team of 20 trained volunteers. At the It’s a Penalty marquee, our team interacted with thousands of people about the issues and encouraged them to #knowthesigns of abuse and exploitation, as well as to report anything suspicious.

It’s a Penalty’s activity around GC2018 contributed to a positive child protection legacy for the sporting event in Australia. Many interactions with sporting fans and tourists at the It’s a Penalty marquee within Carrara Stadium led to referrals for child abuse counselling to our partner NGO Bravehearts. The organizers of the Games, GOLDOC, officially supported It’s a Penalty and. by having hundreds of members of the public seeing the endorsement, it will lead to a positive future association with the Games. Our partnership with the Commonwealth Games Federation and our outstanding impact around GC2018, also lights the way for It’s a Penalty to launch a campaign at the next Commonwealth Games, taking place in Birmingham in 2022; thereby securing a legacy for It’s a Penalty within the Commonwealth arena.

WITH GRATEFUL THANKS TO
OUR FOUNDING PARTNER:

FRIENDS OF THE CAMPAIGN: